Presented below are both lighted costumes and animated porch displays built over the years for Halloween. For over twenty years we have built automated (animatronic) displays for the front porch to scare the trick and treaters at Halloween. Starting simple, with a ghost which makes a ‘boo’ sound when approached, these displays have become more elaborate over the years and now incorporate laser sensors, microcontrollers, and pneumatic actuators. Within the past ten years, displays have included witches who move, stirring boiling cauldrons, and skeletons which pop out of coffins. 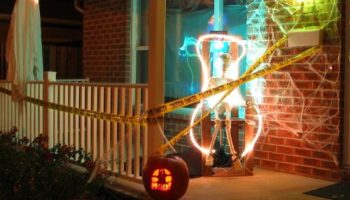 Our 2008 to 2010 displays, pictured here, featured a skeleton in an electric chair. When a kid approaches the porch the system triggers and the skeleton rises out of the chair accompanied by fog, a strobe light, and the loud sounds of an electrical arc. 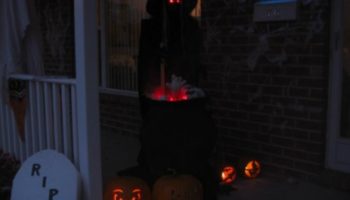 In 2006, the display combined the witch from 2003 and the coffin from 2005. Upon triggering the sensor (visible in the lower left of the photo) the coffin opened, and following a short time delay, the witch turned to greet the trick-or-treaters! 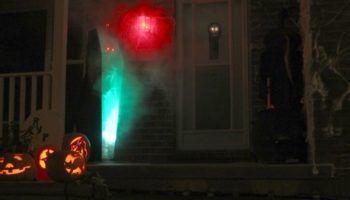 Skeleton Popping Out of a Coffin

The skeleton has taken various forms and each year it seems to get a bit more elaborate. In previous years, such as this display from 2005, the skeleton popped-out of a wooden coffin which, when triggered, is opened via a pneumatic cylinder. 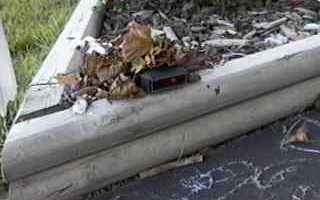 A key element of the display is an accurate sensor to trigger the display when a trick-or-treater approaches the porch. We had tried everything from PIR sensors to ultrasonics but these never proved reliable (the PIR, for example is quite unpredictable in cold weather when the kids are wearing thick jackets under their costumes). 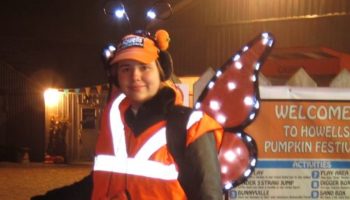 Have you ever seen the Spectromagic night parade at Disneyworld in Florida? One of the types of characters in the parade are butterflies and faeries: actors with large wings lit with many lights. That, I suppose, was inspiration for a lineage of costumes: lighted wings