Back to Electronic Projects

Presented is an analog fan speed controller for an RV air conditioner. The controller, entirely analog and built using discrete components, is designed to slow the speed of the blower motor to reduce noise and increase dehumidification.

In 2008 we bought a new 2008 Trail Sport travel trailer to replace our old destroyed 2004 Trail Lite. The only feature we really missed in our new RV was ducted air conditioning. It came down to an issue of money and weight: a unit with ducted air would have cost about $5000 more (since we’d have to order it) and would add over 500 pounds to the trailer’s weight. We opted for a unit on the lot which had a standard, roof-mounted, Carrier Air-V air conditioning unit. With the addition of a simple fan speed controller, the unit is now considerably nicer to use (especially on hot, muggy nights when the air condition runs all night). 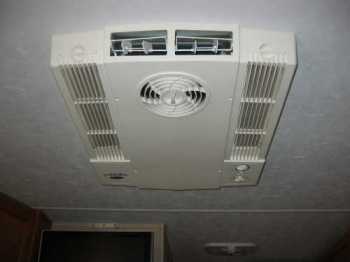 The Air-V unit has an incredibly high volume fan but in doing so two undesirable effects result: the first being the noise of the fan especially when trying to sleep and the second being that the evaporator coils do not run cold enough to dehumidify the air as well as our old RV unit (a Dometic) did. Both problems were solved by slowing the fan speed using a TRIAC based phase-chopper.

While I could have opted for a high-tech design employing a DSP chip (as I used for other projects on this site), I decided to opt for a very low-tech approach using simple discrete components.

This project is presented in the interests of design study only. It will certainly void the warranty and may not represent a safe design. Circuitry such as this, attached to an AC source, is built at your own risk.

Resembling a light-dimmer, numerous designs were found in application notes from ST Microelectronics. The most useful note was AN308 covering TRIAC controls for inductive loads. Air conditioning units such as this use PSC (Permanent Split Capacitor) motors which are inductive and so require special circuit design to handle strange characteristics such as variable load impedance and phase differences between current and voltage. 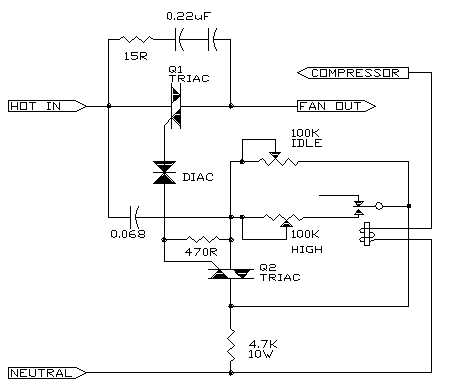 The best overall design uses two TRIACs to generate a train of triggering pulses which are completely symmetrical – important with a motor such as this – see the Application note, circuit 1.3 for a complete explanation of operation. The first version of the fan speed controller uses two generic TRIACs (similar to type C206D). A relay is used to switch the fan to a high speed when the compressor operates to avoid freezing-up of the evaporator coil. This is a relatively low-tech approach and a TRIAC opto-coupler could probably be used here. The circuit performs as per the app note and triggering pulses at 10KHz can be seen on an oscilloscope (this is a standard method of triggering thyristor devices for large industrial controls called a “picket fence”).

The circuit features a DIAC (a bilateral trigger diode) as well as a snubber (the 15 Ω resistor with two series 0.22μF capacitors).

In this simple version of the controller the voltage across the fan motor (as measured with a true-RMS meter) could be varied between 73VAC (representing about 60% of full output) and 123VAC (full) for the IDLE setting and between 102VAC (representing about 80%) and 123VAC for HIGH SPEED. The high-speed setting was purposely limited to prevent the evaporator coil from freeaing-up due to lack of airflow (in which case the coil temperature falls below 0C casuing condensate to freeze solid and impede airflow completely). In operation, the fan speed is very low (and the unit very quiet) until the temperature increases inside the RV at which point the unit’s thermostat starts the compressor, the relay pull-in, and the fan speed increases. Obviously the unit is considerably louder when the compressor is running (with most of the noise from the fan) – using a sound-level meter the decrease in noise was approximately 6dB when the fan speed was reduced. 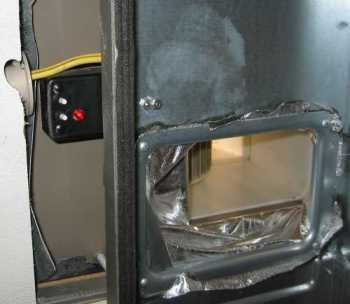 The entire circuit was built into a small plastic box and mounted on top of the air intake so that the speed adjustment potentiometers can be accessed simply by removing one air filter screen and inserting a small screwdriver. The controller was wired into the existing air conditioner via a harness of five wires and an inline Molex connector. Adding the circuit to the air conditioner unit requires breaking the connection between the main switch and the fan motor (all spade terminals), routing the output from the switch formerly to the fan motor to the Hot Input of the controller, tapping the AC Neutral, routing the Fan Output from the controller to the low speed fan wire, tapping the compressor ON signal (tapped after the thermostat in the unit), and of course adding a ground wire for safety. All metal parts in the controller including the heatsink for the TRIAC, are grounded.

Construction is not critical however all components must be mounted to withstand vibration. The circuit was constructed on a small piece of perfboard as well as a single barrier strip inside the box. All components were potted, after assembly, using silicone rubber. The TRIAC was mounted on a small heatsink on top of the box (since it is in the air stream of the unit, it does not even get warm to the touch). Two screws protruding through the bottom of the box allow it to be mounted through two holes already in the intake. 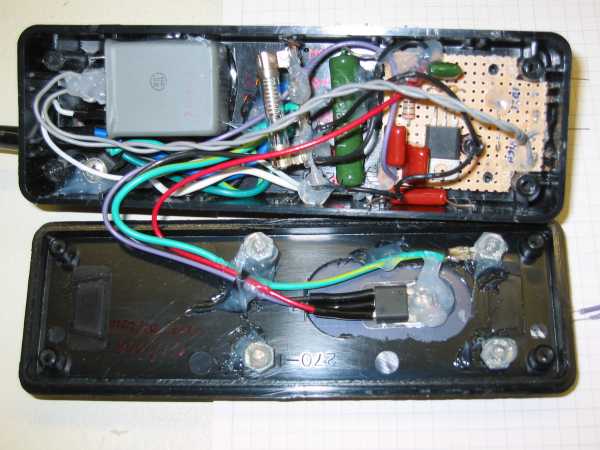 While the controller, as shown here in version 1, works quite well at reducing fan noise, especially on IDLE mode (when the compressor is cycling off), the airflow on HIGH is still too high to allow adequate dehumidification of the inside air: frankly, on a very humid day the cooled air felt “damp”. Slowing the fan more with the compressor running risks freeze-up of the coils and so a sensor is required to increase fan speed should the evaporator coil fall below a preset lower limit. The “traditional” approach would be to incorporate a OP-Amp type comparator (such as an LM311) which requires a low-voltage supply and an isolator however a very low-tech approach was taken (inspired by a 1960’s HP counter) using a neon-lamp coupled with a CdS photocell – this circuit needs no power supply. The circuit works as follows: AC is rectified into about 170VDC. That voltage is divided by a voltage divider consisting of a 635K series resistance and an NTC thermistor. At a temperature of 25C, the thermistor has a resistance of 150K and so the voltage across the neon lamp is less that the 60VDC required to ignite the lamp. The cadmium-sulphide (CdS) cell, in the absence of illumination, has a resistance in excess of 2 MΩ and so the fan speed is, as set by the 100K potentiometer, low. As temperature of the evaporator coil falls, the resistance of the NTC thermistor increases. At a temperature of about 6C the resistance of the thermistor is about 500K and the resulting voltage across the neon climbs to 60VDC at which point it ignites, illuminating the CdS cell, and lowering the resistance of the cell to approx. 2.3K raising the fan speed to maximum which in turn prevents the evaporator coils from freezing-up. The actual temperature at which the neon lamp lights can be set by changing the source resistance. It was set to 6C by experimentally varying the resistance. 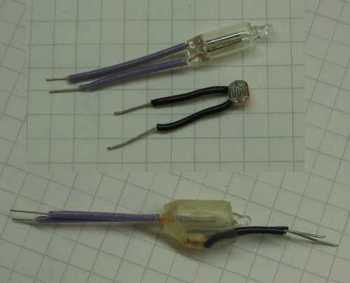 The key to the entire sensor circuit is a unique (at least post 1960’s) opto-coupler consisting of a small CdS cell and NE-2 neon lamp. Both are brought into close proximity and held together via a piece of heat shrink tubing. A second piece of black tubing was shrunk over the entire device to exclude external light.

The anti freeze-up sensor was tested by immersing the thermistor (sealed in double-layer shrink tubing to exclude moisture) into a glass of water into which ice was slowly added until it triggered the fan to high-speed. In operation, on a very humid day, the evaporator was observed to stay above the 6C limit with the fan speed set at about 75% of maximum. The air-conditioning unit was also observed to produce a huge quantity of condensate (much more than it did with the fan on high speed) and the relative humidity in the unit fell into the 30% range. The circuit can be electrically tested by unplugging the sensor at which point the neon lights and the fan speed increases to maximum immediately. With the fan speed low on both IDLE and with the compressor running, the unit is very quiet in operation.

The unit was tested in the most humid weather possible and performed well, dehumidifying air within the trailer. At night, when we decrease the temperature of the RV, it was observed that the unit occasionally did kick the fan into “high speed” mode indicating that the evaporator coils did fall into a range where freeze-up was possible (and so the circuit performed exactly as expected to prevent this). One final note is that the power supply to the protection circuit is not regulated nor are surges on the line suppressed and so it was noted that occasionally when the compressor stopped, the fan would run high for a few seconds then return to low. Likely the cause of this action is an inductive voltage ‘spike’ which could be eliminated by adding a zener to the DC supply for the thermistor circuit.