Skeleton Popping Out of a Coffin 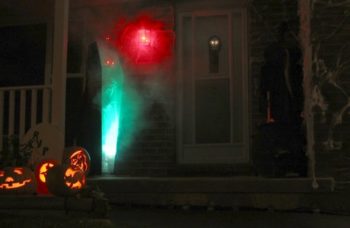 The skeleton has taken various forms and each year it seems to get a bit more elaborate. In previous years, such as this display from 2005, the skeleton popped-out of a wooden coffin which, when triggered, is opened via a pneumatic cylinder. Once opened, and after a small delay, the skeleton suddenly pops right out, driven by a second cylinder.

The coffin itself was built from eighth-inch board with a 1-by-2 frame. Screen door closers operate as pneumatic cylinders – the adjustment screw was removed and a 1/8-27 pipe thread tapped into the end. A flexible line on compression fittings connects the cylinder to a 24V solenoid air control valve. Two cylinders and two valves are employed. When a laser trigger (described below) sets the display in motion, the first cylinder, which opens the coffin door, in activated. An RC delay circuit then provides a delay of about one second before the second valve is opened rapidly firing the skeleton out of the coffin. A commercial fog machine provides spooky effect by filling the coffin with fog while it is closed.

The cauldron and bones from a previous year’s display sits on the right side of the porch.

Click here to view a video of this display. 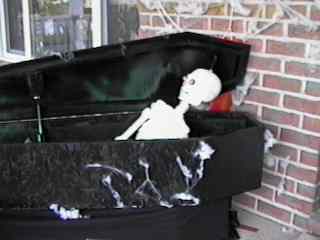 2003’s display was a plastic skeleton which rises from a coffin as kids approach the porch. The coffin itself is built from old pieces of 1/4″ plywood with a 1*2 frame inside so it can easily be dismantled. An old storm-door closer acts as a single-acting pneumatic cylinder to open and close the door. A 3-way solenoid air valve operates the door on demand. This was the basis for 2005’s improved display

An updated version, used in 2007, features a lift inside the coffin so that when triggered the coffin first opens then the skeleton ‘sits up’ abruptly to an upright position. Again, two pneumatic cylinders are employed – one to open the coffin and a second to prop the skeleton up – the action is seen here during prototyping in the workshop.

A fog machine fills the coffin full of spooky fog which is released when opened and a green floodlight inside the coffin draws attention to it. 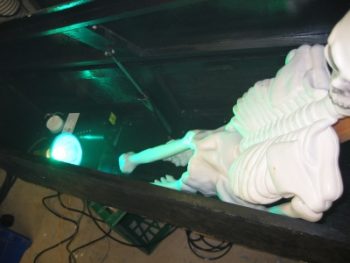 The insides of the coffin reveal the skeleton (on a hinged board which lifts via a cylinder), a green floodlight, and a small fog machine. Previously, a larger fog machine was used which was mounted below the coffin and plumbed-in using ABS pipe.

The cylinder which opens the coffin is also visible in this photo (it is painted black to match the interior).