Back to Arcade Machines 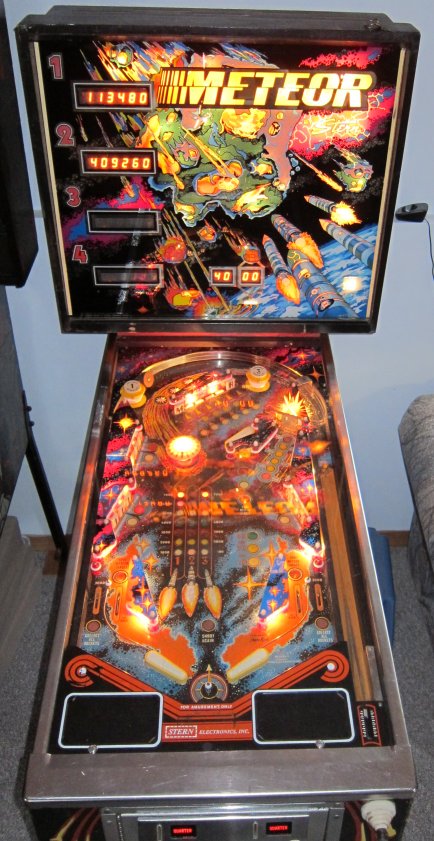 In the fall of 2014, I bought a non-working Stern Meteor game. The same vintage as Firepower (1979), this machine has a relatively nice playfield (no drywall screws in the playfield, this time) but needed a lot more “TLC” in terms of corroded connectors (Stern uses a lot of higher-density electrical connectors of 0.1″ pitch which are less resistant to damage than the Williams machines), bad sockets, flaky 5101 memory chips on the MPU board, a burned-out flipper coil, contacts which were simply burned away completely (several were missing entirely), and more corrosion and fine black dust than I’d ever seen on a machine (it was undoubtedly stored in an outside area since mice had at some point made a home inside the backbox – a litre of antibacterial cleaner fixed that).

As first received, the CPU failed to boot at all. The board was cleaned with methyl alcohol and wired to a test supply (+5V and +12V) on the workbench. Re-seating chips allowed the CPU to boot and run diagnostics (via an on-board LED) which indicated a failed 5101 RAM chip. The chip was eventually found to be faulty, but first the socket needed to be rebuilt: the nearby leaking NiCad battery caused the pins on the socket to corrode badly. The old socket pins were removed, traces on the board under the socket cleaned, and new machined sockets installed (as two strips of 11 pins each – these chips are an unusual 0.4″ / 22 pin size). Replacement of another small transistor was required as well in the reset circuitry – the “power good” detector held the reset line low permanently. With the CPU running all other boards were repaired including the power supply (which had a bad filter capacitor which actually shorted the DC bus outright, and a bad HV section which had visible burn marks on the board). Following that, a large number of connector pins needed replacement (many wires fell out of the connector pins) and finally the electronics were working! The last board to be fixed was the sound board which required replacement of all seven electrolytic capacitors.

Two months of “a few hours here and there” and the machine is now working properly.