Back to Physics @ Disney

Presented here are the results and complete analysis of the Tower of Terror (one of my personal favourites). 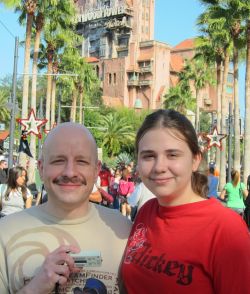 The actual accelerometer is a small, pocket-sized device, with a large internal memory capacity and built-in graphical LCD display. Data collected can then be downloaded to a PC via a serial link and can be analyzed. The entire design is outlined on the Accelerometer page. The device is seen here in my hand, appropriately with the Twilight Zone Tower Of Terror ride seen in the background. On the rear of the unit are three powerful neodymium magnets allowing the device to be attached to ride vehicles – alternately, one can sit on the device to ensure it is attached as best as possible to reduce noise.

An accelerometer measures “proper acceleration”, which is the physical acceleration an object experiences resulting from either motion or from gravity. We often say that an accelerometer measures “g-force” but this is actually not a force at all – rather what is felt is the force of the earth pushing upwards on the observer preventing them from entering a free fall. Consider Mickey in an elevator (as depicted on the left). While Mickey might “feel” the “pull” of gravity, the real force is exerted upwards by the elevator. A stationary accelerometer will hence read “+1g”.

Now, in a free-fall gravity acts on a mass to accelerate it towards the earth. Since nothing pushes upwards on the observer (here, Mickey) feels weightless. The scale upon which Mickey is standing would read zero and an accelerometer in the elevator would read also zero.

So, we often speak of gravity as a “force” but it is really an acceleration – what we feel as gravity is the force that the earth exerts upwards to keep object from entering a free-fall. Regardless of definition, acceleration is often measured in units of “g’s” with one “g” defined as an acceleration of 9.8 m/s2.

A similar situation exists in an accelerating vehicle in which the user feels pushed back into the seat. The actual force is in the forward direction and is, in fact, the force of the vehicle pushing on the passenger.

The accelerometer, which uses an Analog Devices ADXL312 accelerometer chip, records acceleration in three axes in the range +/- 12g as signed numbers with 12-bits of resolution. Sitting on a desk, for example, the Z-axis will read, numerically, about 345 (the resolution of the device, then, being about 2.9 milli-G’s). In reality, the accelerometer in this device is mounted upside-down due to the necessity to attach leads to the package in which it is supplied (this is then inverted in a spreadsheet although the newer firmware revision does this inside the device.

To record a run, the user simply selects the RECord function and data is stored into a large internal flash memory chip. Data from the chip can then be downloaded serially. The resulting data is in CSV (Comma Separated Value) format with the first number a sequence number, and the resulting three numbers the acceleration values per the following example:

In this example, the unit was oriented such that the Y axis is in the vertical (up/down) direction and so the X (column two) and Z (column four) readings hover around zero as expected. There are not many flat surfaces in a ride to mount this device (nor time to look around) so the device was attached to the first steel post found. Inversion of the axis (so that, for example, it reads “+1g” when stationary and not “-1g”) is accomplished in the spreadsheet quite easily.

There is a small offset error from the device itself which could have been eliminated by using the self-calibration feature of the ADXL chip (but was not used in this case so small errors must be corrected during analysis). The third column shows an acceleration of approximately -560 or -1.6g but since the unit is actually inverted, the real force is +1.6g (the upwards force of the elevator on the passengers as it rises rapidly. You’ll notice as well that all three columns show a noise figure in which the signal varies randomly even with the device sitting still – some of this noise is generated by the shaking of the ride vehicle and some is electrical in nature.

The device provides only acceleration data (in units of g’s or, converted, m/s2). Velocity may be found by integrating acceleration with respect to time. Integrating velocity will then result in position. 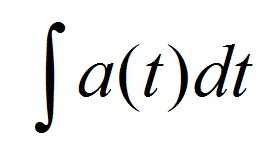 Now, if the acceleration could be determined as a function of time, i.e. the function a(t) could be developed from the observed data, determining velocity would be a simple matter of integrating acceleration with respect to time. If, for example, acceleration was constant the solution to the integral is simply v=at+k where k is a constant (it will solve to the initial velocity of the object before the acceleration occured, namely v0). Unfortunately, real-world object rarely accelerate at a constant rate as is clear from observing the acceleration data recorded, and so a numerical approach is warranted here.

The numerical approach is not magic, it is simply that of using a finite time interval Δt (instead on the infinitely small dt used with an integral) and, assuming that the interval chosen is very small, acceleration is essentially constant during that interval. It isn’t absolutely constant, of course, but if the change of acceleration is small between samples the answer is valid and has a relatively small error from the expected “proper” solution found using calculus.

In the specific case of this data, a simple numerical method may be used to determine velocity by multiplying acceleration times Δx (which is 40ms in this case where a 25Hz sample rate is employed). A spreadsheet was used to analyze this data as follows:

Spreadsheets are wonderful tools for data analysis such as this and lend themselves well to numerical methods. Having employed them for analysis of laser systems I use them here to calculate the motion of the ride car. Data was downloaded to a spreadsheet and several calculations added in adjoining columns as seen here:

Implementation of the spreadsheet is perhaps best illustrated by example. Consider row 3757 which has the following formulae:

F3757=F3756+(1/25) //Calculates the time elapsed from zero (which is defined arbitrarily, in this case as the point where the lift sequence begins

J3757=-1*I3757 //Calculates absolute position from the starting point, correcting for the orientation of the device

formulae from this row are now simply copied to the next 2500 rows causing row references to increment each time (so “F3756” increments on the next row to “F3757” and so on).

Position data may then be graphed (Time in column “F” on the x-axis, and Position in column “J” on the y-axis). With two integrations, it is easy to see how even a small error can result in large errors at the end so each drop sequence was treated separately to avoid cumulative error (seen as “drift” in plots where the ride car remains stationary but the graph continues to slowly climb or fall). The first part of the ride analyzed was the ascent which occurs after guests are loaded into the ride car: 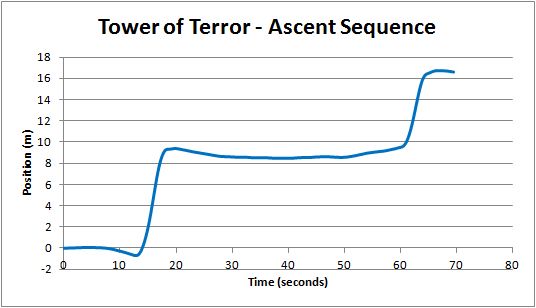 Clearly visible here are two lift sequences. The first brings riders from the loading level (in reality, the second floor of the ride) to a middle position where a twilight-zone-esque video sequence is played. A second lift brings riders to approximately the fifth floor where the ride car travels to the main drop shafts. The data shows, as expected, the load to the main drop shaft occurs at a level of 17m above the loading level (already the second floor). 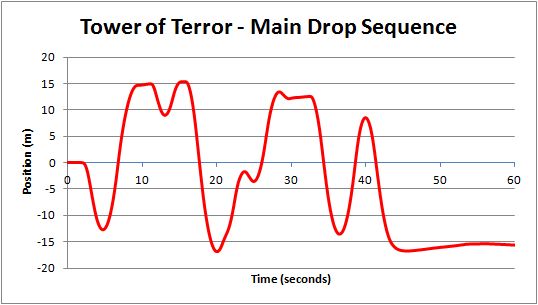 The main drop sequences are always random on this ride. In this case the first drop occurs immediately after loading into the main shaft. Following that, a sequence of drops, including one large drop, occurs over the next 45 seconds. Finally, the car comes to rest – the graph shows this position to be about 17m below the start position but in reality is would be about one floor lower where guests are unloaded. “Zero” is taken to be the loading position however for absolute position, it should be set to 17m (from the ascent, described previously)

Those who have rode the Tower of Terror will recognize several drop sequences such as the small drop at the top of the shaft (around 12 seconds) in which the car flies to the top of the shaft (allowing guests to see over the entire park), makes a small drop, returning to the top (a “teaser” if you will), followed by a massive drop which pulls you upwards from the seat (the car is actually pulled downward by the ride motors and so is falling faster than a free-fall at that point – verified from the acceleration data). Another feature is the second rise to “almost” the top of the shaft (just below the doors at the top), again with a slight drop and rise, followed by a large drop.

The full data set, along with complete analysis, can be Downloaded Here. This is an XLS spreadsheet from Excel 2007. The Y-axis is corrected for polarity (the fact that the accelerometer is inverted) and graphs are embedded into the spreadsheet.

Validity Of This Approach

As stated earlier, the numerical approach is valid only if the acceleration change between samples is small. By simple observation of the data from this ride it can be found that during the largest drop sequence the change in acceleration between two adjacent samples (i.e. over the time period Δt=40ms) averages only 0.12g’s when the data is filtered (using a simple sliding window algorithm) to reduce noise. This is a relatively small value considering it is 7% of the maximum value of acceleration recorded and so logically one expects a final error of under 10% … indeed data recorded on the Rock ‘n Roller Coaster (below) seems to indicate a 10% discrepancy between recorded and accepted values.

Use of a higher sample rate (which the ADXL chip will already support) and a better filtering algorithm to suppress random noise will both help the accuracy of this device.