The PDP-8 series of minicomputers was the first “affordable” minicomputer in a time when mainframes dominated computer departments everywhere. Often described as the “Model T” of the computer industry, this series of machines was responsible, more than any other machine, for the proliferation of computers into labs and institutions everywhere: at a starting price of about $18000 when introduced in 1965, this unit was affordable by many small institutions which could not afford a larger machine. The college where I teach had four units in the 1970s – before this the only options were incredibly expensive mainframes. And by 1973, the PDP8 was the best selling computer in the world.

Small boxes, compared to mainframes at least, minicomputers are about the size of a large microwave oven and in the 1960’s and 1970’s, were built from technology ranging from discrete transistors (for the earliest PDP-8 models built in the mid-1960’s) to integrated circuits in later models.

My collection consists of two PDP-8’s. The first, a PDP-8/F circa 1972, was built in the heyday of minicomputers. It features a “blinking light” front panel from which operators would enter programs. The second, a PDP/8A circa 1978, was built at the end of the minicomputer era at a time when “minis” were already being replaced with “micros” with similar, or superior, capabilities but at much lower cost.

Built with technology contemporary to the late 1960s and early 1970s, the machine is built from relatively simple TTL logic chips (e.g. 7400-series chips, most of which are in 14 and 16-pin packages) and comes from an era when computers had large front panels with a plethora of switches allowing the user to enter programs directly from the panel into memory. 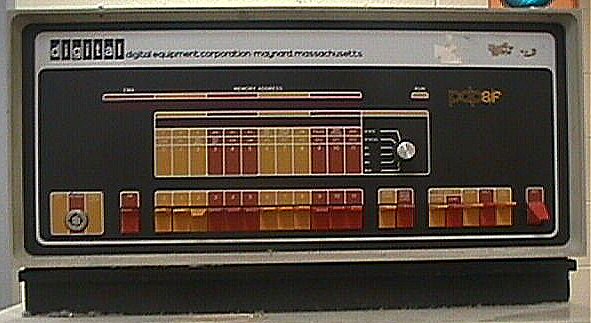 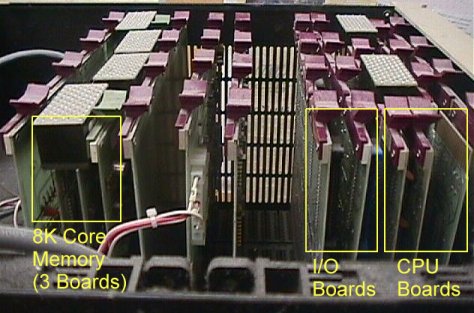 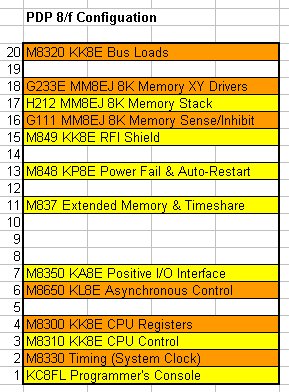 For those of you unfamiliar with a PDP-8 consider that this is a true minicomputer in an era before CPU chips existed. There is no CPU ‘chip’ but rather several printed-circuit boards containing hundreds of discrete logic IC’s. This model was the fifth in the PDP-8 family and used larger printed circuit boards in a bus (Omnibus) allowing the addition of peripherals such as I/O boards, TTY interfaces, and more memory. The base machine was shipped with 4K or 8K … this unit has 8K installed. In the photograph above the CPU boards are seen to the right while the boards on the left are the core memory unit. The diagram on the left shows the configuration of the cards in the twenty-slot backframe.

Programs were entered on the front panel using the toggle switches. A starting address was entered and the LOAD_ADDRESS switch depressed. Machine instructions were then entered one at a time and the DEPOSIT key pressed each time to enter them into memory. When the program was complete, the starting address was entered once again and the START key pressed to run the program. Many small programs were hand-assembled. Consider this small program from the Digital Equipment Corp. Small Computer Handbook, 1967:

After the program runs the accumulator will be found to have a value of 3 and the program counter will have incremented to 00458 as seen on the front panel. Larger programs would be saved to paper tape and loaded into the machine via a teletype unit, the primary I/O device for these machines.

Plans for this machine

This machine is essentially a perfect specimen of a late 1960’s computer. Aside from minor repairs such as one cooling fan which suffered the effects of time no work is required on it! In keeping with a machine true to its day, I plan on running it solely with papertape. While disk drives existed at the time they were horrifically expensive and so before the mid 70’s the preeminent storage method was indeed papertape, usually punched and read from the ASR-33 teletype used as a console for these computers. Adding an RX-01 eight-inch floppy to the system does not do it historical justice (especially an 8/F)! Other ‘historically-correct’ storage devices available at the time include DECTape magnetic tape storage and the DF32 disk file: a fixed-head fixed-disk. Still, given the cost of mass storage, paper tape was certainly the most popular and was the standard for distribution of software.

While I’d like an original teletype to be historically correct these are heavy (100lbs ++) and large (consuming 6 square feet of floor space) beasts and being mechanical they were somewhat prone to frequent repairs (I had an old one given to me once, just the printer section, and it was indeed problematic).

The simpler (and more compact) option is to simply use a terminal emulator on a PC. I use Tera Term Pro which is free and runs under XP. Simply configure the package for 110 baud, No parity, 8 bits, 2 stop, and it is essentially a TTY terminal. The PC can keep a host of papertape images available for use and these can be uploaded as required. One of the links below has a host of tape images available including the OS/8 operating system and FOCAL calculator language.

Aside from the simple program above which increments the accumulator (a good for ensuring the system is running), the next test was to ensure the UART (called an Serial Line Unit or SLU by DEC) was running allowing upload of programming from the console. The M8650 asynchronous card in this machine is factory-preset for 110 baud only (an upgrade card, the -YA version, can handle various baud rates).

First, a BC-01 cable was built to allow the PDP to talk to a PC serial port. The M8650 is fitted with a 40-pin BERG connector – a cable was made as follows which adapts this connector (using a standard 40-pin 0.1″ dual-row header) to a DB-9:

The M8650 card can operate with either a 20mA TTY current loop interface or an EIA (RS-232) interface depending on which jumpers are added to the BERG connector. My original cable was configured to work with a TTY hence why this cable was required.

Second, a simple (hand assembled) program was written as follows to test the UART:

Papertape came in two formats, RIM (Read-In Mode) and binary mode, both of which required a loader resident in memory. RIM mode is the simplest and uses four bytes for each memory entry – two for address and two for data. A typical RIM entry might look (in HEX) like:

In order to read RIM tapes a loader is required which reads bytes from the ASR33 teletype and places these in memory using indirect addressing. The loader (taken from a DEC Small Computer Handbook), with addresses in the left column and my disassembly comments added, is as follows:

The user is required to manually enter the loader using the front-panel switches. It is located at address 7756 – the top of the last page in the first 4K of memory (which is all many machines were shipped with at the time). Having core memory, the loader stays in memory until overwritten.

It is instructive to examine how it works so here’s a quick synopsis:
Retrieve a byte from the UART (KRB instruction). Rotate two bits left three times (7762, 7763, 7766) putting the lowest six bits received into the upper-six of the 12-bit word of this machine. A second retrieve (KRS 7771) receives the lower six bits so that a complete 12-bit word is received. At 7772 a decision is made to check if the received word is an address (bit 6 set in the first byte of the address) or data. If bit 6 (now in the link – what we commonly call the CARRY bit nowadays) ==0 (i.e. it is not an address) then deposit the received word into address pointed-to by 7776 by an indirect memory reference. If link ==1 it is an address word so deposit the received word into location 7776.

One of the most popular applications of the time (used in labs everywhere as a scientific calculator … remember, people were still using slide rules at the time!) was FOCAL for FOrmula CALculator which came in both RIM and binary format. In RIM format the tape is 15.6KBytes in length. Although this takes twenty minutes to load, the machine has core memory which retains contents even when power is removed. This machine currently runs FOCAL ’69. To load it the RIM loader above was keyed-in the front panel, the address set to 77568, and the loader program RUN on the PDP-8. The PCs terminal emulator ackage is then used to send the RIM file in binary format to the PDP. It is evident that the PDP is loading the ‘tape’ since the front-panel lights blink rapidly. Once uploaded (a _long_ process at 110 baud) he PDP-8 is restarted by enter the starting address of the FOCAL program now in memory (02008) on the front panel, loading that address, and RUN the program already there. Being a core-based machine, the program will reside there indefinitely and so may be used at any time without reloading. Other programs available on paper tape (most of which run on a 4K machine) include a FORTRAN compiler and utilities as well as a number of mathematical utilities such as double-precision math routines.

FOCAL ’69 in RIM format as used in this test. This program is Copyright DEC, 1969, and was made available, courtesy of DEC, from Highgates PDP-8 page (see the links below). Be sure to download it in binary format.

A member of the last PDP-8 series built, this PDP-8/A 400 performed data acquisition and collection in a laboratory. 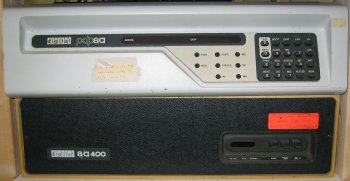 The CPU has two operator panels: the limited-function panel on the bottom with only three switches (allowing powering of the system and booting) and the console on top allowing entry and examination of memory and processor state. This machine, circa 1978, is a later version of the classic PDP-8 minicomputer with similar functions to my the PDP-8/F but considerably updated.

Even the look of the machine is modern resembling that of a mid-1970’s PDP-11 instead of the traditional orange-and-yellow look of a late-60’s or early 70’s PDP-8.

One might note that the PDP-8 lineage dates back to the mid-1960’s and this is one of the last PDP-8’s built … with an address space of 32K, a 12-bit datapath, and 1.5uS cycle times, the writing was on the wall and microprocessors were rapidly overtaking processors built from discrete components like this one – fifteen years is a LONG time for a processor design to survive.

Where the 8/F features a plethora of switches on the front panel allowing the entry of addresses and data words, this updated interface has a keypad and seven-segment display. Memory addresses are loaded in octal via the keypad and displayed on the seven-segment LED display. Memory may be examined as well as written (deposited) allowing entry of programs such as bootstraps for loading programs from I/O devices and disks. Processor state may also be interrogated via the console.

The CPU is built using discrete integrated circuits and comes on three boards – the top three in this case (M8315, M8317, and M8316). The M8316 is a multifunction I/O card which combines functions found on multiple boards on earlier systems including the serial line unit, real time clock, parallel I/O, and console interface.

Below the CPU is a core memory unit consisting of G850 and H2198 boards connected together as a stack.

The first step was to ensure the serial line unit (UART) was functioning. DIP switches on the 8316 board were checked and the board was configured for 300 baud, one stop bit (For a D revision etch the switch settings are 0101111010 for switches 10….1 with a 1 being an ON). A BC-08 EIA cable was used to connect the SLU to a PC directly, the cable being identical to that used on the PDP-8/F above. A simple test program for the SLU, found in the user’s manual, was keyed into the machine at 02008 as follows:

When run, this simple program prints all characters from 0 to 3778 (0xFF in hex) on the terminal so that ‘A’ to ‘Z’ and all other ASCII characters are printed, along with a host of control characters (you know it has hit character 7 when it beeps!). The unit passed that test.