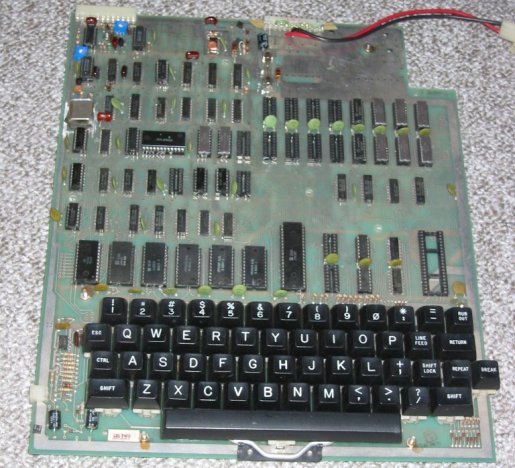 This machine was near-and-dear to me as it was my first real computer, an Ohio Scientific Superboard II. In 1979 I got my machine, a 6502-based single-board computer with a whopping 8K of RAM and BASIC in ROM. The board was completely self-contained, requiring only a 5V, 3A power supply to run (I built my own using a 78H05 regulator).

Ohio Scientific (OSI) started business in 1975 and through the late 1970’s and early 1980’s produced a series of 6502-based machines called the “Challenger” series.

Like contemporaries (including the Apple and the Commodore machines), OSI systems used the low-cost 6502 processor. Created as a low-cost response to Motorola’s 6800 processor, and commercially available (in production quantities) in 1976, the 6502 could use all readily-available and inexpensive 6800 peripheral chips (as OSI did to save cost). The 6502 achieved low costs through a number of design features including the fabrication in NMOS technology and use of “zero-page” memory which allowed reduction of the number of on-chip registers to six. The 6502, in a design reminiscent of the PDP-8 processor, allows fast access to the first 256 bytes of RAM from most instructions (making the 6502 almost RISC-like). The next 256 bytes (0x100 through 0x1FF) are prewired as the stack. All 6502 systems, therefore, require at least 512 bytes of RAM located in the lowest memory page and unlike the contemporary Z-80 processor, programs cannot simply be located at address zero (the 6502 actually fetches a vector for the start program from the highest two bytes – a ROM must be located there). 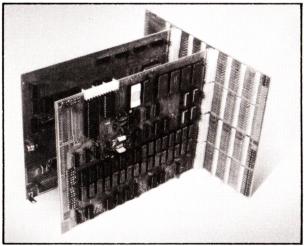 The earliest catalog I could locate was the spring 1978 issue. That year, OSI offered several models based on a single-board CPU, the model 500 card. This card featured 8K BASIC-in-ROM, 4K of RAM on board, and a serial port interface. In the most basic offering, the C2-0 Model 500 Board ($298), the user was required to add a power supply and a serial terminal for a basic stand-alone system. The C-28K 500 Superkit ($398) consisted of the basic model 500 CPU board, again with 4K RAM and 8K BASIC-in-ROM, along with a 480 8-slot backplane and 440 video board (with 32 by 32 character display) allowing use with a video monitor instead of a terminal. It was an unpackaged, “open” system in which the user added a power supply and an external ASCII parallel keyboard for a complete system. Finally the C2-1 500-1 Terminal Add-On ($498) version was basically a simple model 500 CPU board in a case with power supply and standard EIA (RS-232) connectors intended as a “local” computer to run short programs locally.

FYI: the prices quoted are in US dollars from US catalogs. In 1980, the exchange rate for Canadian dollars was less than favourable at about 1.17 so later figures quoted, in Canadian dollars, will always seem higher. 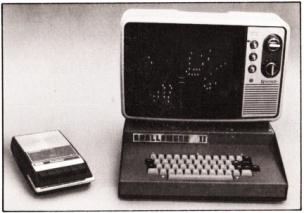 As well as the systems based on a standalone CPU board, OSI offered more complete cassette-based Challenger-II systems. These early machines were housed in blue and black cases (unlike later machines housed in beige ad brown cases).

Offerings from the Spring 1978 catalog included: 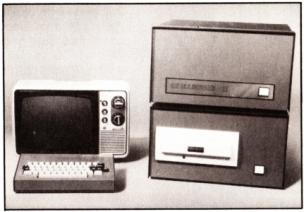 The Challenger-II was also offered with various floppy drive options. All floppy-based systems were housed in two larger black-and-blue cases, one for the CPU with an 8-slot backplane and separate keyboard and a second case for the floppy drive(s) which had white fronts. Configurations included: A 16K RAM system with a single 8-inch drive (250K) and a serial port (C2-S1S) for $1990, A similar system except with a video card (C2-S1V) listed for $2490, and a 32K RAM system with a dual floppy drive (C2-S2S) for $3090. Note that many systems utilized serial terminals for user interface in the same manner as contemporary mainframe machines did … many larger OSI systems were indeed designed to use terminals (the front of the 1978 catalog shows a Challenger II system with two eight inch floppy drives and a Hazeltine 1500 terminal in an office setting).

Finally, the Challenger-III system was also available in 1978 with a triple-CPU board (6502, 6800, and Z80) and a dual floppy drive for $3590. Options for the Challenger-III system included a 74 Megabyte hard drive for $6000 (drive only) – a hard drive was an almost unheard-of option in 1978 and something always associated with a large mainframe computer, not a “personal” machine. Having a Z80 processor, this system could run CP/M!

By 1979, OSI offered three types of systems including the new low-cost Challenger I, as well as Challenger II and III systems.

The new Challenger-I systems for 1979:

As well as these systems, listed in the spring 1979 catalog, OSI also offered several Challenger-III systems with up to 48K RAM and several odd versions of the “regular” Challenger lines above including an inexpensive C1P system with a single-sided mini-floppy and 12K of RAM (running P-DOS for “Pico-DOS” since 12K is not enough RAM to run OS-65D) and a C2-4P MF system with colour video, sound, and AC remote control I/O from the factory.

In 1980 OSI changed both the look of their machines, adopting a beige-and-brown colour scheme and renamed their product line from the “C2-4P” to the “C4P” and “C2-8P” to “C8P”: none of their computers carried the “Challenger-II” designation anymore (which, of course, created a great deal of confusion amongst owners). The C1P and C4P models had beige metal cases with oiled walnut wood sides. 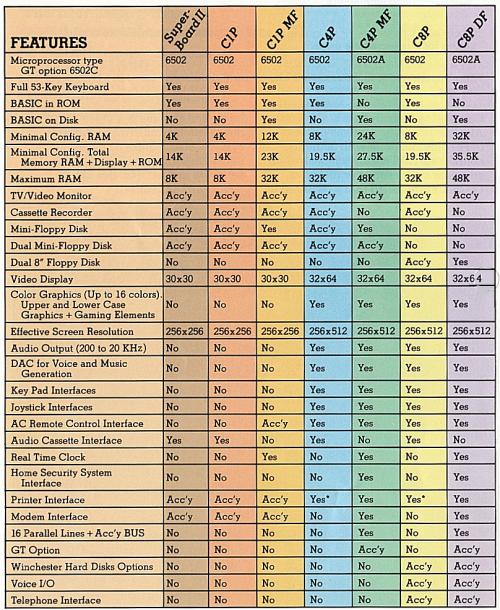 This chart showing the OSI product line was taken from the 1980 catalog. It offers insight into systems available at the time and basic features of all available systems.

Not mentioned in their catalogs, but apparently available, were special “OEM” version with deep cases holding both eight-inch floppy drives as well as an 8-slot backplane in the rear.

There are two types of OSI systems on this page, the Superboard/Challenger 1P machine covered below and 500-series (Challenger 2) hardware, which used the OSI 48-line bus, covered further down on the page.

If you are into the history of OSI, or other late 1970 / early 1980 systems, you might enjoy some of the podcasts at Floppy Days. The OSI was featured on episode 27 with some commentary provided by myself.

Floppy-based systems usually ran the OS65D system, for most applications, or OS65U for more demanding applications (it featured extensions for timesharing 16 terminals as well as extensions for database management). Both systems were centered around BASIC although an assembler and extended monitor were included allowing the writing of machine-code programs for the system. When the system is booted the kernel loads and immediately runs a BASIC program named ‘BEXEC*’ on the floppy disk. Usually, the user is either presented with a menu from which the user selects an operation or for development purposes the user may select to run BASIC and is presented with a BASIC prompt. Typing EXIT in BASIC brings the user to the actual O/S command interpreter, usually with a familiar “A” prompt. From the command interpreter the user could execute simple disk operations as well as run BASIC, and assembler, or an extended monitor (and possibly other languages).

Oddly, most utility program included with OS-65D were written in BASIC. Utilities included:

The ‘native’ O/S appears to be entirely track-driven: an application could save or load a program or data from the disk via track number however the creation of a directory and access to files by name requires the use of utility programs. Built-in functions in the O/S include the ability to invoke the BASIC interpreter, assembler, or extended monitor; initialize (format) a disk, load and save files from/to memory, and select an active drive letter.

If this all looks primitive, remember that OS-65D was created in 1976 and PC-DOS would not appear until quite some time down the road. Original PC’s came with BASIC-in-ROM and a cassette port as well … floppy disks were still expensive in the early 80’s and it was not intended that all machines would have drives.

Below is a listing of various OSI cards allowing identification of these should you come across them. It was compiled from various OSI literature. Included are photos of the boards in my collection and schematics for a few select boards.

The 500 board could be used as a complete ‘stand-alone’ board featuring 8K BASIC in ROM and 4K of RAM on board or as the CPU board in a larger system. All that was required for stand-alone was an ASCII RS-232 terminal as well as a power supply. It was also available as a ‘SuperKit’ with this 500 board, a 440 video board, and an 8-slot backplane for these and more cards. For the SuperKit, ROMs were configured to use video and a user-supplied ASCII parallel keyboard instead of the RS-232 terminal (the RS-232 option was not installed on the 500 board for this version).

I have scanned a listing of all cards available for the OSI 48 line bus. These cards were designed for use with 500 series systems like the above) but could also be used with a 600 board with a 610 expander installed.

Have a look at the specs and pricing for an OSI system as seen in Popular Electronics in 1978. Shown are various configurations as well as many I/O boards available for the OSI.