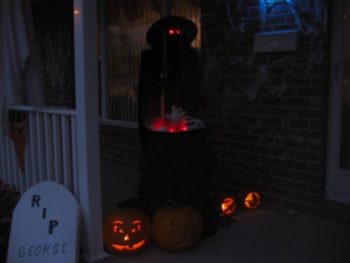 In 2006, the display combined the witch from 2003 and the coffin from 2005. Upon triggering the sensor (visible in the lower left of the photo) the coffin opened, and following a short time delay, the witch turned to greet the trick-or-treaters! Turning the witch was accomplished by mounting her on a piece of wood with a large bolt as a pivot. A pneumatic cylinder actuates the mount.

In 2004, the display featured a boiling cauldron ‘stirred’ by a witch. A hand, operated by a pneumatic cylinder, comes out of the cauldron when triggered. The display was improved two years later to feature the witch on a turntable allowing it to move quickly to face oncoming trick-and-treaters. 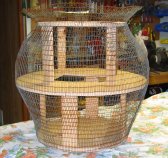 For the witch and cauldron display, the cauldron was made from paper-mache (I used strips of paper soaked in drywall compound) and is 22 inches in diameter. It features a moving hand which comes out of the cauldron when kids cross the laser-sensor (details below) by pneumatic power. The cauldron also features a moving stirring-spoon driven by a windshield-wiper motor inside – when attached to the witch it appears that the witch is stirring the brew. Pumped full of fog from a fog machine underneath, the addition of a red spotlight and a load of plastic bones on top gives the illusion of some sinister brew of bones!