Most of my favorites lie in the 80’s although there are a few 70’s bands here. This is list of my current favorites. The 80’s stuff in this list has endured through the years and _still_ sounds good. There is no particular order to this list although my favorite (if I had to pick one) would undoubtedly be ‘Blinded Me With Science’. Of course, favourite songs are like moods and change with time….

Most of which are one hit wonders … for favorite albums, see list below… It was a top-20 list but I’m not sure what to eliminate

A few more I found which still sound great! …. so much for 23

I was at UofW at the time spending evening at Fed Hall so this in the kind of stuff you’d hear there. There’s a lot of weird stuff in there … (the Goth kind that wants to make you dress in black and stand in front of a subwoofer 🙂

A Few Other Gems

Which deserve mention. Some, straight from the Rolley Alley rink (ever lie on your back on a roller skating rink floor during the ‘Rock Lobster’?), others, made popular via music videos. 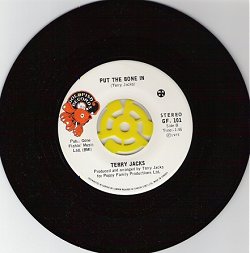 A colleague and I occasionally debate the nature of seventies music. I usually present the ‘corporate rock’ argument while he feels there was lots of great music that came out during the period – but best of all, Yes (identified the colleague yet?).

My argument was that while there was an occasional good song, bands came up with a lot of crap to fill an album. Maybe bands still do this (I can think of a few examples of lousy music on various albums I own), but it seemed that the reverse side of 45 rpm records contained the particularly bad stuff ….

Consider this gem (as in “let’s bury it”) on the B side of the sappy-sweet 1973 hit “Seasons In The Sun” by Terry Jacks. ‘Seasons’ was a popular song and one misunderstood. _I_ thought it was about some guy dying of cancer, but if you look at the lyrics for the album version, you find a verse missing on the 45 version (the one which explains that he killed his best friend, Emile, since he was too friendly with his wife François). Hmmmpf … solves that mystery (ain’t the web great). Further, ‘Seasons’ was a remake, originally performed by the Kingston Trio.

While ‘Seasons’ may have, in many people’s book, been on the top ten list of bad songs you ain’t heard NOTHING yet until you’ve heard the B side! Consider the lyrics for ‘Put The Bone In’: Put the bone in she asked him at the store. Cuz my doggies been hit by a car. And I do want to bring him something. Put the bone in, she asked him once more. It gets WORSE, if you can believe that, on the second verse where the sweet pork meat is described. In _my_ book, this one tops (bottoms?) the list of the worst songs of all time.

Gone But Not Forgotten

HamsterDance A site which clearly fell into the half-baked category. It was created in 1998 by graphics student, Dierdre LaCarte, on a bet that _her_ site would get more hits than her sister’s or friend’s. Well, it’s had over 12 million hits. No longer in operation, the cute little tune developed for this site was the inspiration for the dance hit of the same name.