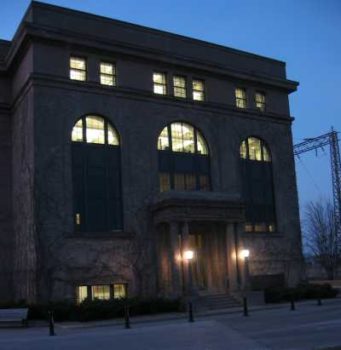 Continuing from a previous page on Canadian Niagara Power’s Rankine generating station, this page covers the Sir Adam Beck I (SAB-1) generating station in Queenston, Ontario. This tour was organized by the Niagara chapter of the Professional Engineers Ontario in April of 2008. SAB-1 was the fourth plant in Niagara Falls, Canada, and has been updated since it first appeared on the grid. Today this plant, along with the adjoining SAB-2 station supply a good portion of Ontario with power.

The story of this plant begins in 1905, when privately-owned generating stations began appearing at the falls (three were built, or about to be built, that year). Many citizens of Ontario felt that the government should be involved in the generation of power as a ‘free’ resource owned by the people of the province. That year, the issue of public ownership of Niagara power was in the forefront and the Provincial Conservative Party won the election, running on a platform advocating public power. Future privately-owned generating stations were not allowed at Niagara and the government created the Ontario Hydro Electric Power Commission to buy and distribute power for the province. Adam Beck, a key proponent of public ownership of power utilities in Ontario, was appointed commissioner.

As time went on, the commission (run by Beck who was knighted by Britain for his service to the Commonwealth of Canada) began looking at building it’s own power generating station at Niagara instead of simply buying power from the three stations already operating at the top of the falls. In 1917, the commission purchased the Ontario Power Company (and its generating plant located just below the falls) and began construction of a new plant at Queenston. This plant was renamed the Sir Adam Beck Generating Station in 1950 (25 years after Beck’s death). 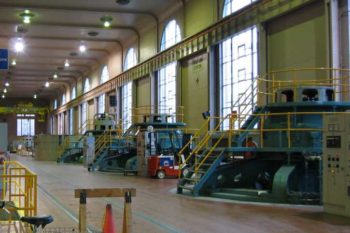 The commission began by investigating possible locations for new plant. Since the drop of water at Queenston (320 feet) is much larger than that at the falls (about 130 feet), each gallon of water flowing through the SAB plants can produce about three times the output as plants located at the top of the falls. Water from the Niagara river enters the Welland river at Chippawa, flows westward for 6km to a power canal, and another 20km to the forebay at the station in Queenston. Prior to SAB-1, the Welland river flowed naturally eastward – for the new power project the direction of the river would be reversed!

SAB-1 was opened in 1921 and, like all other early plants in Niagara, was a 25Hz plant. It has ten generating units. Today, many of the generators have already been converted, or are in the process of conversion, to 60Hz. Only two remaining generating units operate at 25Hz (in 2008) and those units, too, are slated for conversion to 60Hz in 2009 after the complete discontinuation of 25Hz power in Ontario. The plant itself, seen above, houses a mixture of old 25Hz generators, modern 60Hz units, and a frequency changer (disussed below). 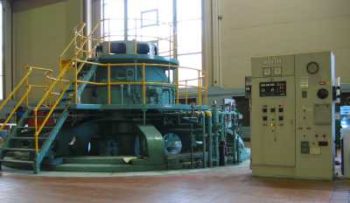 Since 2005, the last privately-owned generating station in Niagara, Canadian Niagara Power’s Rankine plant, has sold their water rights to OPG but this left a void in the production of 25Hz power. To handle the 25Hz loads (there are fewer and fewer each year as older equipment is upgraded), SAB-1 has maintained a few 25Hz generating units like the one pictured here. 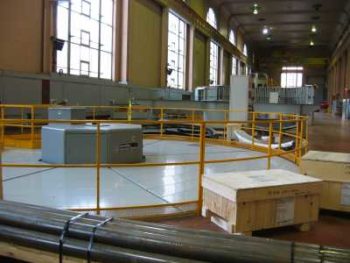 In contrast to the older 25Hz units in which the rear bearing and exciter ring protrudes well above the station floor level, the 60Hz units are buried entirely into the floor of the station and are quite streamlined. The specification plate for one of the new generators (#5) is seen here: it is a 63MVA unit generating at 13.8kV. 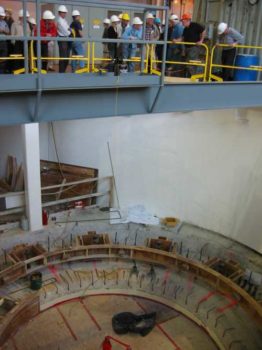 During the tour, I was afforded a rare glimpse of the retrofit process. The old generator #6 was removed and the site was in the midst of preparation for the new 60Hz generator (identical to unit #5 pictured above). The photo reveals the station floor (with the tour group looking on), a large steel-beam catwalk above the hole, and the port where the turbine will be inserted below that, covered in plywood in this case. One floor below the station floor is the subfloor where the stator sits and wiring is connected.

Below that level is the pentstock and turbine (the hole is covered with plywood in this photo). Remedial concrete work is evident here where reinforcing bars and huge bolts (to support the new stator) can be seen protruding from freshly-poured concrete. 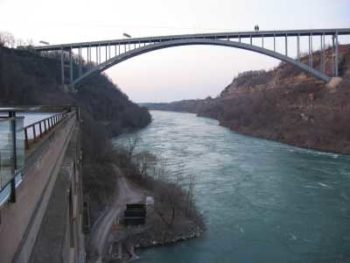 Unlike older plants at the top of the falls, SAB-1 did not use long vertical shafts. Turbines, with generators immediately on top, are located at the base of the pentstocks – the entire plant is situated directly inside the Niagara Gorge and discharge from the plant flows directly into the Niagara river.

The gorge is seen here, looking North towards lake Ontario. The Queenston-Lewiston bridge linking Canada and the USA is seen in the background. 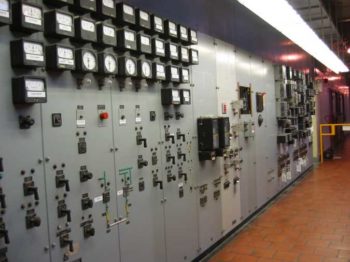 SAB-1 also houses the frequency changer which interconnects the 25Hz and 60Hz grids. This unimposing unit is set into the floor of the generating station at the southern end of the plant with the top portion resembling any other unit in the station. It is a Motor-Generator (M-G) set consisting of a large 60Hz motor coupled to a 25Hz generator.

The control panel for the machine is pictured above and this close-up of the controls for the frequency changer reveals frequency meters for both grids (the 25Hz grid on the left, 60Hz on the right) and the synchroscopes allowing the device to be synchronized to each grid separately.

Later, in 1954, a second generating station, SAB-2 was built immediately south of the existing SAB-1 plant. The new 60Hz plant would house 16 generating units and could produce three times the output of the #1 plant (which is still in operation). The plants share the forebay. The original water supply canals for SAB-1, which brought water from the Niagara river via the now-reversed Welland river, and through a large open canal into the forebay, were not nearly large enough to supply water for the new SAB-2 station so two new tunnels were drilled under the city of Niagara Falls to bring extra water from the intakes at Chippawa to the forebay. 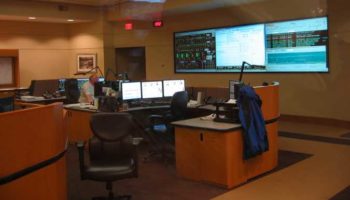 The SAB-1 station also houses the new control room which services both SAB-1 and SAB-2. This modern facility is completely computerized and features a wall-sized display as seen in this photo. The left side of the display shows a summary of all generating units in both plants: sixteen in SAB-2 and ten in SAB-1. The middle panel summarizes notes and comments, and status as well as alarms are shown in the right panel (one warning I had noted was ‘Black Start Diesel fuel low’ … presumably a diesel generator would be used to excite the generators initially should total failure of the grid occur as it did in 1965).

Now that all three original power stations at the top of the falls are idle, water allotments for those plants can be channelled to the SAB-1 and 2 stations. Because the drop at Queenston (320 feet) is much larger than that at the falls (about 130 feet), each gallon of water flowing through the SAB plants can produce about three times the output as plants at the top of the falls. with this in mind, OPG is now drilling a massive third tunnel under Niagara Falls to bring even more water from the top of the Niagara River to the SAB stations. See the OPG website for details of this fascinating undertaking. 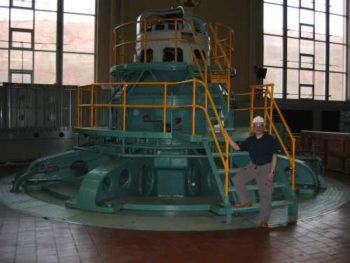 I hope you enjoyed this tour of a second generating station at Niagara (the first being the Rankine station, an older plant located at the top of the falls) and yet another steeped in rich history, originally generating 25Hz power.

A professor at Niagara College in Canada, my personal interests extend to the history of technology. If you have any comments, you can contact me via the link in the left column of this page. Please refer to the ‘SAB’ station on the subject line.