A New Chapter …. Quite Literally 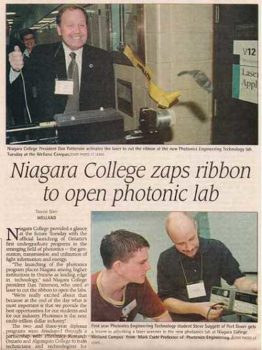 Enter the launch of the Photonics programs at Niagara College in 2001 and I find myself once again (happily) knee-deep in the field of lasers, teaching numerous laser courses at the technician, technology, and (when we offered it) applied-bachelor level (see the Courses page on the Technology website and check out PHTN1300, PHTN1400, PHTN1432, and PHTN1500). The article to the left, from the Evening Tribune (Oct 3, 2001) shows the grand opening of the program in which our college president Dan Patterson used my baby flashlamp-pumped YAG laser to cut a ribbon and open the lab. Our programs, and new laboratories therein, have required the construction and rebuilding of many lasers and laser systems. Our high-powered laser lab has three large-frame argon-ion lasers (Coherent Innova-90 and Innova-200, and a Spectra-Physics 2020) as well as a few smaller air-cooled argon and kryptons, several carbon-dioxide lasers including an MPB DC laser and several Synrad RF lasers, a Lumonics 600 excimer with Hyperdye-300 dye laser, a tunable Ti:Sapphire laser, two YAGs (one diode-pumped Lee LDP-20 and one flashlamp-pumped Quantel 660 unit), and a host of other laser projects. As well as lasers, my other forte is high-vacuum and thin-film technologies. We have built a Mass, Optical, and Infrared Specroscopy lab at the college which features two turbomolecular pumping systems for reprocessing gas lasers (HeNe, Ar, Kr, etc) and for mass spectroscopy work. We also have a full class-1000 cleanroon for production of thin-film devices. Our deposition facility include thermal, sputtering (Lesker PVD-75), and eBeam systems. Our programs are in full-swing and I shall be busy teaching courses in Photonics for many years! While originally hired at the college to teach computer engineering technology, my teaching load is now primarily photonics courses.

I am the author of a book entitled ‘Fundamentals of Light Sources and Lasers’ published by John Wiley & Sons (ISBN 0-471-47660-9). The fact that ‘Wiley’ is the publisher is a non-intentional, however appropriate, match since ‘Wile E.’ is indeed my favourite cartoon character and indeed I’ve had a few ‘Wile E.’ moments in the lab (as in the production of smoke followed by the expression ‘Oh Well, Back to the old drawing board’).

Focussing primarily on lasers, the text introduces background concepts necessary to understand lasers including the nature of light itself, blackbody radiation and atomic emission, as well as basic quantum mechanics. Lasers are covered in detail with practical, real-world examples (as well as experimental proof of many otherwise esoteric concepts) found throughout. The last six chapters of the text outline various laser systems in detail including visible, UV, and IR gas lasers, semiconductor lasers, solid-state lasers, and tunable dye lasers.

As well, I have also written an article on lasers for the Kirk-Othmer Encyclopedia of Chemical Technology also by Wiley.

And so, I am back in the field in which I started although some things have changed: I have better equipment at my disposal (like thin-film evaporators for fabrication of precision optics and turbomolecular high-vacuum systems) and more lasers in my lab than I’d have ever dreamed possible. I think of my return to lasers as my having come ‘full circle’ although engineering has certainly helped, not hurt, my knowledge of lasers since I now tend think “like an engineer” about problems which are otherwise purely scientific in nature.