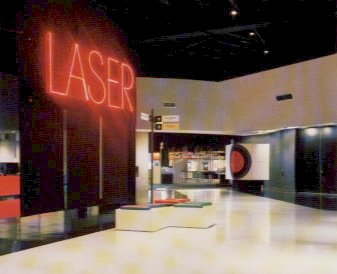 I suppose I can’t say enough good about my parents. They indulged my scientific curiosities, financed projects, and took my brother and I to the Ontario Science Center in Toronto at least once a year (A place I took my kids to when they were younger). The science center is an awesome facility featuring displays on a host of science topics ranging from astronomy to chemistry and up until recently featured a display on lasers. As a kid in the 70’s I recall well watching the display with awe! The center opened in late 1969 and was groundbreaking in that the displays were interactive and visitors were encouraged to push buttons (see the “coffee” machine below). It was likely one of the first museums of its type. 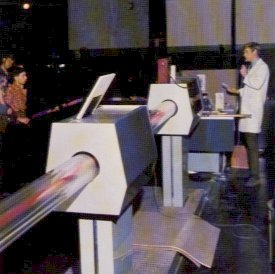 The focal point of the display was a huge carbon-dioxide laser. Built for Expo ’67 in Montreal by the General Electric company of France, the laser found a home at the science center for the next thirty years until being retired recently. The laser was several metres long and had a rated power of about 100W. Demonstrators would evacuate the tube and then slowly leak helium (first), then nitrogen, and finally carbon-dioxide gas into the tube as fantastic colours appeared each time – you could see the gas travelling through the tube as the colour changed! After the last gas was added the laser began to lase and would burn a hole into whatever was in it’s path. My fascination with that beast (and it was a beast by today’s standards – we have a small air-cooled Synrad Firestar unit which has higher output powers) as well as the argon laser they had there (with its vibrant blue, green, and violet beams split by a prism) sparked my pursuit of studies in lasers which continues today (Hey, in a technology field you NEVER stop learning!). 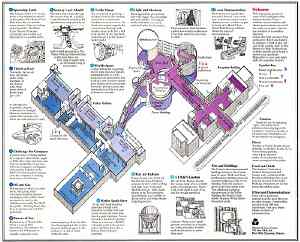 If I had to say one one place ‘turned my crank’ for science it would be the Science Center. The place has changed in the past 40 years but it’s still a fun place (and YES, I still consider science FUN). For a view of what the place had in the 1970’s, just click here to find a map of the facility with highlights of all the demonstrations. The old laser display was removed reportedly because they could not afford to repair it any longer. The Electrical display, featuring a large Tesla coil, as well as the Chemistry display featuring liquid nitrogen are still there (although they have moved). As well they have added some neat stuff like a small metal foundry. I would not have noticed when I was a kid, since I had no interest in astronomy, but the center also features a small planetarium and a few years ago an IMAX theater was added.

I haven’t been there in a decade or so, so there are probably a hundred other changes since then! 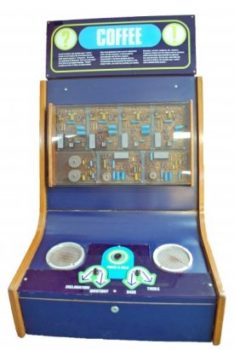 One machine that fascinated me (and one I likely monopolized at the OSC) simply said ‘COFFEE’ and was located in the center hall. The machine was built from discrete components and had a series of coils and capacitors for filters and oscillators. Lamps lit up the letters “C”, “O”, “FF” and “EE” as the machine spoke. Visitors could vary parameters using two analog pots to make the word sound different: bass/treble could be varied as well as the tone of the word from a “question” to an “exclamation”. I recently located this photo on the OSC Memories Facebook page. The photo was stolen from this page – no photo credit was recorded on that site.

Need more “Coffee”? You can hear a clip of that machine operating here (the sound clip was extracted from a video profiling the Evoluon center (when it was a science center in the 1960’s and 70’s) … that video is available on the Evoluon site as well. The Evoluon, BTW, closed in 1989 as a science museum. The only point I debate on that site was that the coffee machine was given to the OSC in 1989 …. I recall it being at the OSC in the 1970’s!

Personal note: in the 1980’s I built a voice synthesizer based on a GI SPO-256 chip (Radio Shack actually sold these at one time). The first word it ever said: “coffee” :).

Other really neat stuff I remember at the OSC which is now gone:

Like I said, take a look at a map of the center showing highlights. If you were there in the 70’s, it will probably bring back a host of good memories! 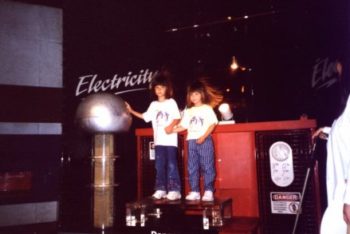 My kids in 2003 at the science center ‘playing’ with the Van De Graaff generator and having a hair-raising experience.