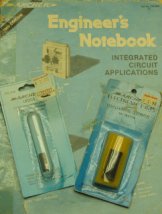 It is hard to imagine an engineer over 40 who does not have a copy of the Engineer’s Notebook by Forrest M. Mims III pictured here (the 1980 edition). Radio Shack sold all of the components listed in the book (yes, they had chips and resistors in their retail stores) and so one could purchase an SN76477 complex sound generator for $2.99 (the 28-pin chip on the right) and wire it on a breadboard (also available at the store) to make all sorts of noises. Radio Shack’s chips all came with a data sheet stapled to the back to assist the builder – in the case of this sound generator chip it was quite extensive and was the most complex chip many experimenters would have dared use – but even a pack of assorted SCRs came with a datasheet describing pinouts and application circuits. The other chip (on the left) is an LM3916 bargraph chip used to make 10-segment LED meters. I bet both of these chips ring a bell to many who cut their teeth into electronics during the late 70s and early 80s.

I took to digital readily – probably because I lacked the theory to understand analog properly! When you’re self-taught in electronics by ‘the hobbyist approach’ you tend to focus on building things and not on how they work, yet to do analog justice you really need to understand circuit design, frequency response, have a decent ability to apply math, etc. Sure, I could design simple circuits and knew enough to put a large resistance in series to limit current but designing circuits like analog filters requires more complex math which I just didn’t have. For digital there was little theory to understand – apply 5 volts and the rest is simply ones and zeroes! The math was exceedingly simple (once binary was understood) and it either “worked” or it didn’t. Ahhh, a niche I fell into. Of course throughout the 70’s computers were becoming more common. Most were the ‘blinking light’ style with large impressive front panels like the PDP-11’s at the science center in Toronto that one could play ‘tic-tac-toe’ with. One local grocery store, Dominion as I recall, even went computerized with modern cash registers and a central computer (behind glass) complete, of course, with blinking lights. By grade 8 I had a my own computer, a REAL computer, an Ohio Scientific Superboard II. This glorious machine had 8K of RAM (expanded from the factory-standard 4K), stored programs on cassette tape, and displayed video on a TV as 24-column text. On the hardware side, I built I/O interfaces (to drive LEDs and read switches) and my own memory expansion using 2114 RAM chips. On the software side, I learned to program BASIC. I really ‘cut my teeth’ on that machine which was my first real hands-on intro to computers.

Science, like electronics perhaps, was in a similar boat for the home experimenter since I have a collection of odd magazines from the 1960’s like Science Experimenter with articles on the construction of Tesla coils, Van De Graaff generators, and more. I was too late to shop at places like ‘Morris and Lee’ (seen in ads in those old magazines), a science store in Buffalo which sold kits for many pieces of apparatus as well as things like diffusion pumps! It is possible I was born a few years too late. Then again, nowadays, the internet has filled-in the gap to a large extent allowing the rapid exchange of ideas just not possible before. Still, the notion that one could walk into a science shop and purchase a specialized thing like a diffusion pump?