University was a bit anti-climactic, at least the academic part: I was no longer ‘the smartest guy in class’ nor was I busy indulging in science which _I_ found interesting rather I was studying whatever was in the curriculum and in many cases, getting buried in school work.

School was comfortable enough. For several years during my first degree (at Waterloo, studying physics) I lived on-campus at the Village-1 dorms. My room featured a PC, a stereo, fridge, microwave oven (which as disguised as a filing cabinet since cooking appliances were forbidden), and (for one very hot summer term) an air conditioner carefully ducted through the window to exhaust hot air. In retrospect, the air conditioner contributed greatly to my success that hot summer since I was more than happy to stay in my cool room and study calculus, which is what I was there for in the first place. Of course, it was not an “allowed” item, especially since it blew breakers when other students in adjoining rooms tried to use a hair dryer – the addition of a simple timer to shut it down before everyone else awoke solved that problem (leaving me only to explain why each morning I had to dump a pail of extremely cold water into the sink).

… and despite school, I still had time to learn some neat stuff …

During these days, I dabbled with a few interesting things like high voltage, made frequent trips to the surplus store in Waterloo, bought a ton of surplus at University surplus sales once a year, built a three-channel colour organ for nostalgia’s sake (visible in the photo above), and made an interesting little transmitter to hijack FM stations replacing _their_ signal with my signal (which usually involved offensive music like einsturzende neubauten). 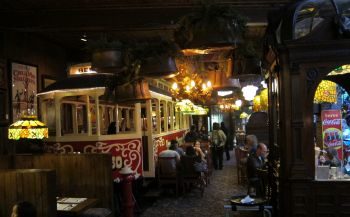 Periodically, we’d make trips to Toronto, occasionally to visit the science center and occasionally to shop the surplus stores on Queen Street followed by dinner at the Old Spaghetti Factory …. always a treat! At the surplus stores we’d buy a whole bunch of computer parts, cheap, and use them for various microprocessor projects (like the EPROM programmer outlined below).

I have always enjoyed dabbling with high voltage (as you can see from the spark coil I had enjoyed using as a kid at the top of this page). Well, you meet some really strange interesting people in the dorm like one curious soul, Kenn Heinrich, who built a large Tesla coil in his dorm room. Kenn’s coil consisted of two neon-sign transformers (15,000 volts each) driving a metre tall coil wound on black ABS pipe. In its peak of operation, it produced arcs 26 inches long! That corresponds to approximately a half a MEGAVOLT! (You don’t measure voltages that high with a DMM after all). Numerous improvements (e.g. a low inductance spark gap) and numerous mishaps (e.g. starting carpet on fire when the side of one transformer exploded violently) led to the final version which caused a big enough stir at the dorms to have the Ontario Hydro safety inspector pay Kenn a visit! Needless to say that pretty much curtailed development before he hit the ‘holy grail’ of One Megavolt. Unfortunately, I can’t find photos of Kenn`s coil in my memoirs but I did locate a photo of a second coil built by Mark Koehler, also at the dorms. This was a more ‘refined’ coil (meaning it did not start any fires, wipe out any cable systems, nor punch holes through aluminized dorm mirrors being used as capacitors) using a large double-sided printed-circuit board we obtained from K-W surplus as a capacitor (visible in the background). 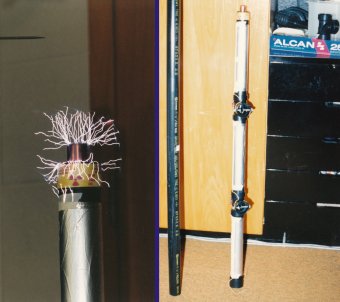 Aside from helping in the development of those Tesla coils (I had learned a lot about fast discharge circuits from my days of building lasers for science fair projects which was useful here), I built myself a Marx-bank generator in my dorm as seen here (the original application envisioned was likely as an excitation source for a pulsed neon laser). The device produced about 200kV but with a risetime in the nanoseconds – the Fourier transform is quite broadband so it kills almost all forms of communications. The generator was built from pieces of ABS sewer pipe (one of my favourite materials) used as coaxial capacitors with spark gaps fabricated into plumbing tees between the caps. That generator threatened my new PC more than once (I had already had to rebuild the output drivers on my CGA card a few times due to a flaky monitor and wasn’t looking forward to diagnosing yet more problems) so it was shelved before it cost too much time in repairs of adjoining equipment … in a ten-foot square dorm room there isn’t much space to escape a rogue high-voltage arc that follows some odd, unpredictable, path!

Well, I received an e-mail from Kenn. Might be respectable now (two kids and such … who knows, might even have a minivan by now 🙂 but he _has_ outlined his coil experiments on this page. Yes, ABS sewer pipe was one of my favorite materials to build lasers, etc. from and yes, the ‘offending’ laboratory equipment was hidden under my dorm bed when the safety people paid Kenn a visit. He did fail to mention the radioactive krypton-85 filled tubes we once got at a surplus store in London, Ontario, though … (The same one which was playing Kate Bush music after poor Kenn had just been subjected to an hour and a half of this by me on the trip down … doesn’t it just figure 🙂

I also learned about microprocessors and microcontrollers and built my own Z-8 based EPROM programmer to further my hobby in computers. Until then, I had built numerous interfaces and memory expansions to my old Ohio Scientific computer but had never actually built a microprocessor system “from scratch”. In those days, EPROMs were a necessity and few people had a programmer: mine used a Z8-BASIC chip (Z8671) and was wire-wrapped on a piece of perfboard. A bank of DIP switches configured the socket for various types of EPROMs (the unit was originally designed for 2716 and 2732 types but was expanded many times to accommodate multiple types). These switches configured the function of various pins as well as voltages (Vcc and Vpp), the rest was done in software written in BASIC. To use the programmer the main program was first uploaded from a PC to the unit then data was uploaded/downloaded to the chip in the same manner. Visible in this photo is a stack of 2K RAM chips with the chip-enable lines bent upward and wired to a 74LS138 decoder (2K chips were all that was available cheaply from surplus suppliers at the time).

Here are a few close-up details of the Z8 Eprom programmer including the Bottom of the board showing the mass or wirewrapping and the Switches allowing the programmer to be configured for various types of chips (these actually configure the function of various pins which change based on the chip in use).

They say school “teaches you to learn” and that it did. The art of learning is one all student must master and included many late nights studying including, in my final year, the occasional “study party” in the physics building where a bunch of us got together to attempt to decipher what the prof covered. At these parties, attended by twelve or so students, we’d get together and try to solve problems from class. We’d collect $2 from everyone, run out to the closest convenience store to buy chips and Coke, and spend hours poring over complex problems. When someone got it right, we’d all examine _how_ to solve the problem properly. All part of the learning process!

After I did physics at Waterloo, I did computer engineering at McMaster, and then real-life set-in somewhere along the way (mortgage, marriage, kids, cat … I hear a country song in there somewhere). Still being an ‘Amateur Scientist’ at heart, I have constructed several lasers since those science-fair days, many outlined on the Homebuilt Lasers Site. And since I’m still into embedded control I have built a number of Projects, most PIC-based. I have even recreated my old colour organ, this time using a DSP chip to accomplish all filtering.